My family is from Chicago. Well, I grew up in the Northwest suburbs, but we spent a lot of time downtown. I’m usually averse to the crowds and tall buildings. I love green and the city is etched in gray. But, for some reason, during the holidays the city becomes beautiful to me. K had never been, and I simply had to introduce him to the city during this time of year.

Chicago has a decaying opulence to it, like a Mayan ruin. K says that it oozes the culture of adolescent industrial country. Chicago’s America is one where people stopped building infrastructure in the ’40’s and then let the vines take over in subsequent decades. It’s beautiful how Detroit is beautiful, but with more people. The city is still dreaming of the nineteen-seventies, instead of the twenty-seventies. 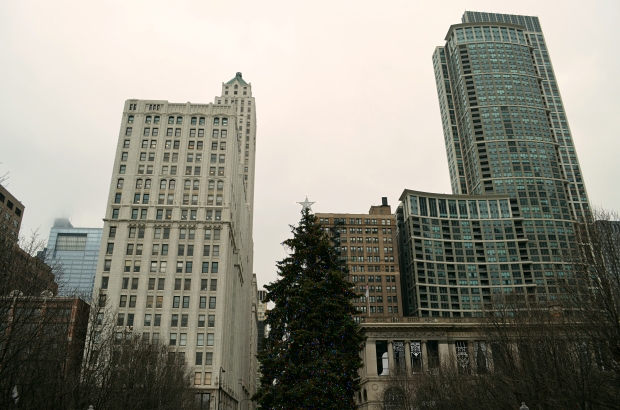 Naturally, I had to show him all of the throwback places we visited during my childhood.

Bonus points if you can find us “Where’s Waldo” style.

We visited Millennium Park (and took about 1,000 “Bean” photos). This was the 102 year displaying a local tree (a 63 foot Colorado Spruce), but the first year they moved the tree from the Daley Plaza to the Park that has become Chicago’s most iconic tourist destination.

We saw the windows at Macy’s (sadly no longer Marshall Fields). The store’s innards were terribly bustling with last-minute shoppers. Outside gave way to child astronaut-themed decorations, partially animatronic and looking like a Pixar film’s envisioning of childhood nostalgia. There were street musicians in the milieu–a man playing tenor sax with an oxygen tank nearby, and a Salvation Army euphonium.

We went to the Christkindlmart as well. Aside from my favorite misplaced Picasso sculpture, it looks like a transplant from the Schwarzwald or a village plucked from the Austrian mountains. We looked at the baubles and bangles for sale in the ornament shops, sampled some delicious foods, and drank wine out of the customary ceramic boots. 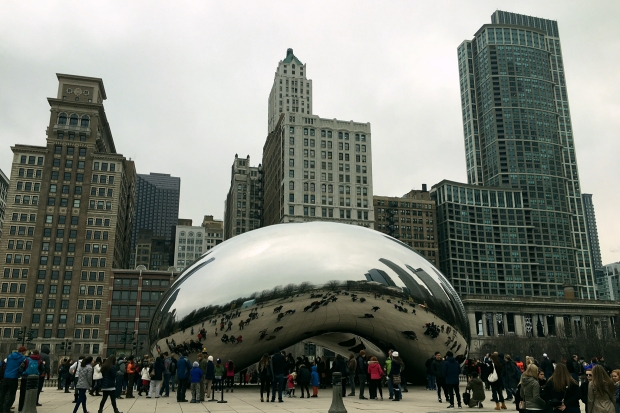 Then we shambled back onto the “L” for trivia with friends of friends. We won, thanks to K’s Kerouac knowledge, proving that an English degree is worth something after all!

The concept of new starts and new resolutions is so refreshing. I am fascinated by the idea that there might be a time when I will be able to achieve my dreams, and then I get myself excited to take the steps necessary to get there. I love the New Year for this reason. Without further ado, here are our reflections:

On this last day of 2015, I decided not to the traditional list of best/worst moments. Why? Because, as you might have noticed from the sparsity of our recent posts, this year has not been one of many singular exciting events. Rather, it has been a year of slow and profound changes. We made another move. I completed my first Semester towards a Master’s degrees from UNC Chapel Hill. We just celebrated four amazing years together. We worked hard to find a balance between being responsible grownups and ignoring real life to play.

2015 aired on the side of hard work. It has been a year filled with incredibly fulfilling personal challenges for both of us. We’ve been trying to expand creatively, and continue to learn so much from fellow bloggers, artists, peers, friends and family. We’ve continued to use this blog as a way to connect with those for are far from wherever we’re calling home.

Personally, I want to do more with 2016. I want to do better. I want to take things down a new path. I want to pick up the camera more instead of posing in front of it. I’m going to pursue new passions that I’ve discovered this year. I’m going to challenge myself to show a more true version of things that inspire me. Here’s to hoping that 2016 brings more fresh air, more sleeping under the stars, more campfires, more dirty hands, and less “stuff.”

Can’t wait to share these new beginnings with you.

I recently spent an hour and a half in a flotation tank. It was my birthday present (thanks V!). Many of the stimuli I was used to dropped out of the picture for a while. I experienced the rawness of my own body: breath, heartbeat, digestion, other basic sensations.

I mention this because it was an isolating, contemplative experience. Much like this year. As the V suggested, we didn’t do too much. It was more about the slow change than the quick, exciting bursts that had happened before.

For the first part of 2015, I dropped out (Timothy Leary style). In retrospect, it was something I had been thinking about for years, something I had always been curious about. I spent most of that time teaching myself programing, not working a steady job, and dumpster diving for necessities when the season allowed it. I focused on meeting my (and V’s) needs in the simplest, and lowest-impact way possible. It was a whirlwind adventure that took me across disciplines, and taught me about what I’d like to study when I finally grow up.

Toward the latter half of the year, I transitioned back into society. I got my name on the apartment lease and utilities. I got a real, adult-person job. I’ve started saving money, more than I ever have. And I like to think that we’re thinking about the future differently than we did when we first got back from China. 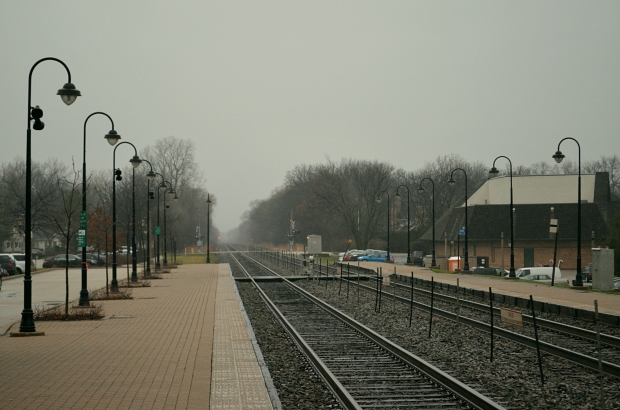 Even with all of this change, there were setbacks. I got Lyme disease. Or so we thought: I contracted a bacterial infection from a tick when we were camping. It knocked me down for a week. The entire ordeal made me appreciate my health, friends, and normal able-bodied state much more. As a result of this, one of my goals this year is better fitness and maintenance.

What does the future hold? Well, I’d like to put my tech skills to use. My friend at work is doing a startup–if I’m lucky I might get involved with that. We’ve also had a bit of points-earning, frequent-flyer-mile-banking craziness that we might write about in the future. Stuff that’s going to let us travel further and cheaper than ever before.

2 thoughts on “Christmas in Chicago”