Stop. You have to see this!

When I first learned I was going to take a trip to Philadelphia, I was excited. I would get to see some friends I hadn’t spent time with in ages. The city itself didn’t matter to me–it was mostly about D and R (and Trudy, the cat).

I even mocked the city a bit by calling it exotic and scenic–words you definitely wouldn’t use to describe a former factory town. But it won me over.

After all the requisite chatting and bonding with friends on the first day, the iSchools Conference was great. There were some excellent, heady talks about where technology, schooling, and privacy were going. I made a friend that may serve as my entrée to the field. Though I was there for work, I spent almost as much time exploring the city as hanging out or consulting at the conference.

I was impressed. Philly is weirdly romantic and unpretentiously beautiful. The city crumbles under the weight of its history. Like Chicago, but it’s not so overstuffed. And the graffiti! 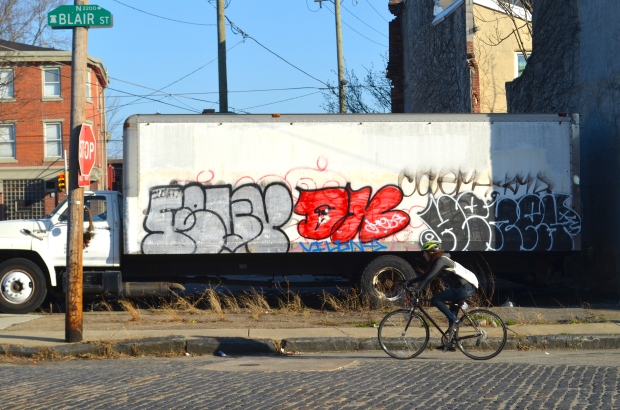 It’s almost like a Chinese city in its lawlessness and vivacity. There’s many people here doing their own thing, with little regard to social norms or expectations. Also, everyone is weird, and unabashedly so.

D was saying that in the summer, people in their neighborhood strap motors to anything with four wheels and zip around in the streets. You don’t see that kind of raw creativity much in America.

It’s also on the cusp of something. Like many postindustrial cities, Philadelphia is rapidly gentrifying. Since New York is so close by and so expensive, young people are coming to Philly in droves. That makes the city particularly youthful and exciting, but at a cost.

You can walk down streets that are half buildings from a hundred years ago, and half Fisher-Price looking condos. It’s sad to see neighborhoods bulldozed and replaced with rich people housing, even if there were ramshackle tenements or vacant lots there before. I added some more pictures of beautiful doors and storefronts to my collection, which you can see interspersed with the text here.

What should you do? Definitely go to the Mütter Museum. Take the El downtown and walk the mile to the waterfront–it’s worth encountering the geography of the city. I won’t attempt to do it justice by writing about it. There’s no photos allowed inside, but suffice it to say it’s the most amazing collection of medical oddities you’ll ever lay eyes on.

If you’re looking to take goofy selfies, make your way down to Sixth and check out the National Constitution Center. There’s life-size statues of our founding fathers there, frozen in carbonite. I posed with Franklin, my favorite 81-year-old nudist politician. Across the knoll, you can see the Liberty Bell as well. Both are closed after six, so be sure to get it in early. Take the public transit for this one; you don’t have to walk.

What about eats? If you’re a meat eater, get a cheese steak. They’re kinda gross, but you might as well. Have some Kenzinger’s (affectionately dubbed Kenzos, definitely a step above PBR) and check out Sketch Burger for a good meal. Almost every place in the city is BYOB because of weird liquor laws. If you only want a snack, get a pretzel. They are strangely shaped in Philly.

If you get a chance, pick a neighborhood (I chose Fishtown, where my friends live) and wander through. 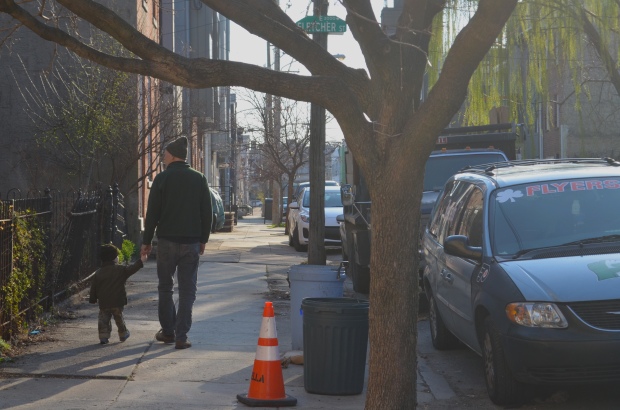 Marvel at the hand-painted signs for businesses from 70 years ago, and the beautiful murals. Or just take in the architecture: on one street, it might look like colonial Williamsburg, and another it might be more like 80’s New York. 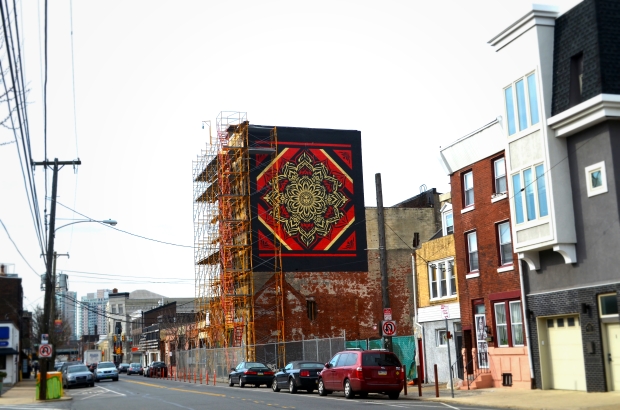 On the El, I noticed a stalactite. Look out for those. Don’t hit your head. Also, everywhere you go, the floor is wet–consider wearing galoshes.

And one thing you surely shouldn’t miss: Philadelphia’s Magic Gardens. Isaiah Zagar made his house into a work of art over a period of several years.

His work sprawled out into a vacant lot, and is growing like moss on adjacent buildings.

You can park far away and walk through the Philly Street Market to get there. We went to a cheesemonger and record/book store on the way, but you can get anything from tortillas to ostrich before you take in some of Zagar’s delicious art. 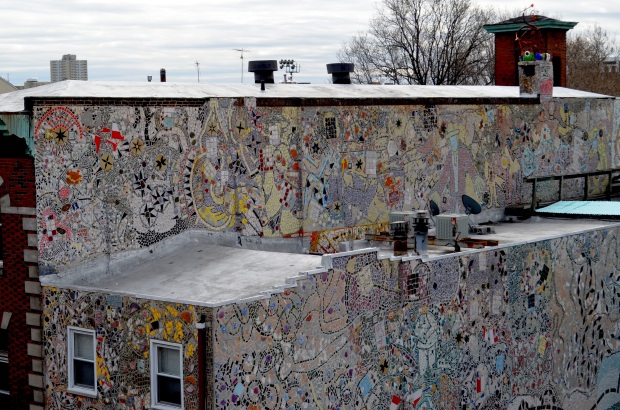 For all of you in Internetland, hope your Easter was fanciful and without regret.